http://www.sunday-guardian.com/news/bharara-in-damage-control-mode-over-modi-summons
Posted by Admin at 15:26 No comments:

If India is to be taken seriously as a great power, its economy needs to expand from the present level of $2 trillion to $10 trillion, a fact understood by Prime Minister Narendra Modi. This is why he has made ‘Make in India’ his signature tune.
Professor MD Nalapat says that to tap India’s mammoth resources, Prime Minister Narendra Modi need to engage US and achieve the trillion dollar quest.
He adds that India needs put in place a regulatory structure which rather monitors than constricts new investment. Taxes, regulations and interest rates need to be lowered for the economy to boom in a way never seen since 1947. 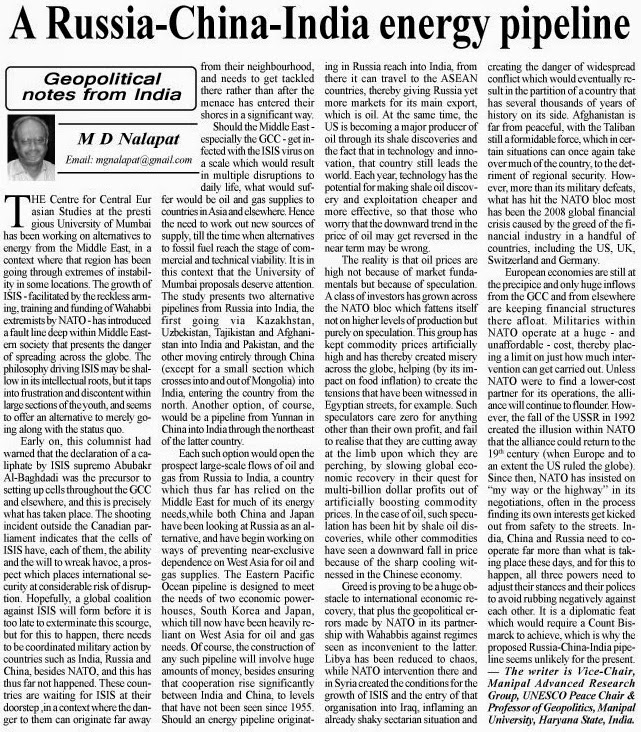 Prime Minister Narendra Modi’s mantra of ‘Minimum Government, Maximum Governance’ has worked since he assumed office in May 2014. Narendra Modi’s concept of minimum government and maximum governance is said to have changed the way the government functions in his home state of Gujarat , making it more efficient. He describes the model as ‘more of development politics’ and similar to a ‘one day’ cricket match. He has indicated that he is keen to replicate this model at the national level.
Prof MD Nalapat, candidly writing about this in his latest blog, opines that Narendra Modi was elected to power on a break with the Nehruvian “slow speed” past, and for this to happen, not just the PMO but key ministries such as HRD, Defence, Commerce, Energy, Home and Finance need to act as prime movers. So, right now, what India needs is minimum 50 percent of Modipower and key ministers of the Government to contribute at least 50% of the efficiency shown by PM Modi himself.
He adds that in the meantime, what is needed is for the Prime Minister to each day take forward his promise of Minimum Government and Maximum Governance.

Published on Oct 20, 2014
A day after returning from the Parappana Agrahara prison in Bangalore, former CM and AIADMK supremo J Jayalalithaa announced a solatium of Rs 3 lakh for the families of sympathisers who lost their lives after her conviction on September 27.
According to an official statement from the AIADMK, as many as 193 people have lost their lives.
Expressing her pain at the reports of suicides after her conviction, she announced a solatium of Rs 3 lakh each to the families of 193 people and a relief of Rs 50,000 each for three partymen who were fighting for their lives at a hospital. She also wished them speedy recovery and thanked those who were praying for her early acquittal in the case. A statement issued by Jayalalithaa Sunday also appealed to the cadres to not indulge in any violent activities and suicide attempts.

Karnataka High Court today allowed the Lokayukta Police probe against BJP National Vice-President B S Yeddyurappa and others, on a petition challenging the Lokayukta Court order dismissing complaints against them in a land denotification case in Shimoga district.

Published on Oct 21, 2014
Kashmiri campaign groups in the UK are divided over a planned anti-India rally here to highlight the Kashmir issue with some groups dismissing it as being against the interest of the people of Jammu and Kashmir.

The so-called 'Million March' planned from Trafalgar Square to Downing Street on October 26 is being led by Barrister Sultan Mahmood Chaudhry.
While his group claims overwhelming support from various communities, others have dismissed it as against the "national interest of the people of Jammu and Kashmir".

After the Assembly Poll results were announced, BJP stormed to power in Haryana, winning the State for the first time alone since it was formed in 1966.
Urban Maharashtra voted in favour of Bharatiya Janata Party and Shiv Sena in these elections with the former way ahead in the race while Congress, NCP and the MNS were decimated.
In Haryana, with an absolute majority in its favour, the BJP is all set to form a Government of its own. In Maharashtra, where it has fallen short of a majority, it would require an ally, which could likely be the Shiv Sena. BJP secured 122 seats in the 288-Member Maharashtra Assembly.
Speaking exclusively to Niti Central, Professor MD Nalapat says the voters of Haryana have voted for good governance and under the efficient leadership of PM Narendra Modi, have called for a developed and corruption-free State.
Considering how important Maharashtra is for BJP’s political fate, adverse factors like the break-up with Shiv Sena didn’t deter voters to support BJP and shun conventional regionalism.
He adds that in his view, Modi is a nationalist and a true patriot and the debate over regional and national issues should be shunned and work towards a collaborative development for India should be given priority.