Al Qaeda finds base in India, Modi is on its radar (Sunday Guardian) 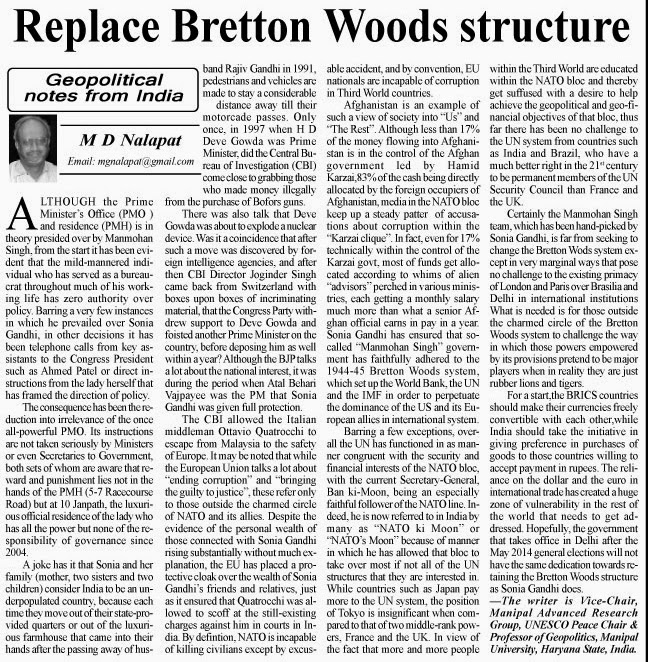 Sunday, March 23, 2014 - It was unexpected that President Vladimir Putin of the Russian Federation would ignore the warnings of the US and its NATO allies and re-incorporate Crimea into the Russian state. Putin is more than twenty years late in this essential (for Russian security and geopolitical significance) step.

The re-merger of Crimea ought to have been done in 1992 itself when Ukraine became an independent state, as this territory has historically been part of Russia and was placed under the Ukraine only for administrative convenience in 1954. However, because of the fact that then Russian President Boris Yeltsin followed a policy of near-total acquiescence in the dictates of the Russo phobic Clinton administration, he failed to demand that Kiev return the Crimea to Moscow. The fact is that the Crimea is as strategically located as Kashmir for example is, and control of the territory is crucial for Moscow ensuring that any future policy of military envelopment against it will not take place.

In the subcontinent, the entire territory of Kashmir gives the holder access to central as well as south-central and west-central Asia, which is why the fact that India holds only the Kashmir Valley as well as Jammu and parts of Ladakh has sharply circumscribed its ability to influence matters throughout this vast region. The clear calculation behind the secret and overt backing given by NATO agencies, both NGO as well as GO (governmental organisations) to anti-Russian groups in Ukraine was that Putin would not interfere militarily, and would confine himself only to verbal protests. Such was the information reaching NATO-based intelligence agencies from  contacts high up in the Russian government an within business groups viewed as close to the Kremlin.

In their zeal to weaken Russia further by setting up a government in Ukraine which would demand that Moscow pull back its naval and other forces from the Crimea, it is clear that Barack Obama, Francois Hollande and Angela Merkel (whose anti-Russian impulses are well disguised, which is why Prime Minister Dmitry Medvedev of Russia is an admirer of hers) made the same mistake as Jawaharlal Nehru in 1962. The Indian premier assumed on the basis of his Intelligence Bureau chief B N Mullick that Beijing would not respond except with verbal barbs to the reckless “forward policy” of army that was implemented by his hand-picked Corps Commander (also a close relative), Lt-Gen B M Kaul, who holds record of being the most promoted in peacetime but in wartime the least competent General in the history of modern Indian army. Although he recognised Kaul’s shortcomings, then Defence Minister Vengalil Kumaran Krishna Menon fawned on him so as to keep Nehru happy.

The Chinese hit back in October 1962,shocking Nehru almost out of his mind and impelling him to send a series of pathetic letters to US President John F Kennedy, begging for military help. Had Kennedy been able to overcome the objections of the UK-centric policy advisors he had on India (including his envoy J K Galbraith who had contempt for Nehru but pretended otherwise while in Delhi) and respond in full measure to Nehru’s pleading, India may have been swiftly transformed into a US ally rather than move into the USSR’s orbit as it subsequently did. Instead, Kennedy sought to use Nehru’s distress to fulfill the Harold Wilson agenda of making India surrender the Kashmir Valley, sending a high-level mission to Delhi to pressurize the Indian establishment into making such a concession.

Just as M A Jinnah had backed the Allies during the 1939-45 war while Mahatma Gandhi had adopted a “neutral’ policy which in effect was tilted towards the Axis, the Pakistan army under General Mohammad Ayub Khan had joined the US and the UK in a military alliance, the very grouping that Nehru used to publicly condemn almost every week to the anger of US officials, steeped as he was in the anti-US Fabian socialism of his days in college in the UK. The consequence of the sharp difference in language and behaviour of General Ayub and Nehru towards the World War II allies was that both London and Washington decided to try and settle the Kashmir issues in accordance with wishes of GHQ in Rawalpindi. As a consequence, nothing came of the 1963 effort at mediation, while the opportunity for an alliance between Delhi and Washington was lost in the din of recriminations that accompanied the Harriman-Sandys mission on Kashmir, while refusal of Washington and London to pressurise Delhi beyond a point made Field Marshal Ayub Khan reach out to Beijing as an add-on to Washington.

Because of the fact that they have so much influence within both the government as well as with Big Business in Moscow, the perception that Vladimir Putin would not respond militarily to the snatching away of the Ukraine from the Russian to the NATO sphere of influence was complete in Brussels. Had there been any doubt about this, there would not have been the enthusiastic (and largely open) support that was given to the illegal ouster of President Boris Yanukovich of Ukraine and his replacement with a businessperson with extensive investments within the NATO bloc. According to the trio of Obama, Hollande and Merkel, the newly-appointed Prime Minister of Crimes is “illegitimate”. At the same time, right-wing group that took power in Kiev by ousting Viktor Yanukovich not by the ballot but by street power is “legitimate”. As NATO definition of the global community comprises of itself and followers of NATO, they are claiming that the government in Kiev (although unelected) is legal while the elected (and bundled out) regime is not. The dilemma facing NATO is that Putin is only doing what the alliance itself has done so very often, the use of military force as a substitute for other means of persuasion.

Carrying the sanctions forward will drain confidence in the GCC, Russia and China that London, Frankfurt, Zurich and New York are safe repositories for their money. What is likely is a steady drain of funds away from these centres, because after the confiscation of so much wealth from Libya, it is clear that the NATO bloc regards everybody else’s cash as its own. Now that they have repeated Nehru’s 1962 mistake, Hollande and Merkel are on course to destroy the financial industry that is the foundation for the dominance of their alliance.

For Narendra Modi, enemies can be more useful than friends (Sunday Guardian)