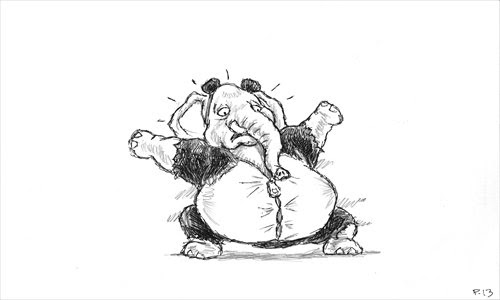 A copy is almost never as good as the original, which is why India's efforts at copying the Chinese trajectory in Central Asia have yielded meager returns.

Though the Indian and Chinese economies were equal in size 30 years ago, since then China has become nearly five times the economic size of India.

Given the dysfunctional nature of the governance system in India and the neglect of indigenous enterprises in favor of foreign investors, the business model of engagement favored by Beijing will not resonate in Central Asia for Delhi.

India's state enterprises in particular are hobbled by ministerial meddling and poor balance sheets. And with a small defense industry, India still has to depend on Russia, France, Israel and the US for more than 80 percent of its core defense needs.

Central Asia has vast petroproduct reserves, as does India. Unfortunately, for decades successive governments in Delhi have concentrated less on local discoveries of oil and gas and more on importing these products.

The severe shortage of foreign exchange, visible in the steady decline in the value of the rupee, is forcing even the foreign-friendly government of India to ramp up local exploration and cut back on imports. This being the case, to expect that India can vie with China as a major buyer of Central Asian natural resources is to be unrealistic.

Even in the matter of purchase of oil and gas fields, the vastly bigger size and access to cheap finance of Chinese companies result in their winning against their Indian rivals on practically every occasion.

Given the high interest rate policy of the Reserve Bank of India and the country's continuing governance deficit, such a situation is unlikely to be reversed for quite some time.

Even should a more efficient government come to office in Delhi, it will take several years before the new setup can eradicate the damage done to the economy by years of mismanagement.

Central Asia is a region which is not only geographically and culturally close to India, but one in which the inherent advantages of India can be brought into play.

Although analysts assume that Pakistan is closer to Central Asia because of the Muslim factor, the reality is that the Islam of Central Asia is much closer to the moderate practices of the religion in India than it is to the rapidly Wahhabizing theology which has been gaining ascendancy in Pakistan.

It is in the interest of long-term stability in Central Asia that the advance of the Wahhabi faith be reversed in the region.

In such a process, India can play a significant role by encouraging Indian universities to either set up campuses in Central Asia or by students from the region coming to India to study.

If the government of India had devoted itself to the spread of Indian educational units in Central Asia, using even a quarter of the resources it has spent on largely unsuccessful efforts to beat China in getting hold of local resources, by now Delhi's profile in the region would have been much larger.

India has an immense advantage in the huge numbers of English language speakers in the country, and this skill is very much in demand in Central Asia, as are other fields in which India has done well, such as information technology, medicine and engineering.

It's not just the greater prevalence of English plus the existence of a vibrant and moderate Muslim community of 160 million people in India, but popular culture too is a field where Delhi has the advantage over Beijing.

In Afghanistan, Bollywood has helped ensure that the people of that country retain their affection for things Indian, and the same can take place in Central Asia, if there is a greater effort to ensure access to Indian music and movies throughout the region.

This could be buttressed by tourism, encouraging citizens in Asia's third biggest economy to spend their holidays in Central Asia rather than in far more expensive Europe.

More than state-to-state or even company-to-company links, it is people-to-people exchanges that have the potential to make India as big a geopolitical force in Central Asia as its much more prosperous eastern neighbor.
http://www.globaltimes.cn/content/792172.shtml#.Ucz7cuDYelI
Posted by Admin at 08:31