Will Modi Get Free of Lutyens Delhi (Pakistan Observer)

Rahul focuses on strategy for a No NaMo 2019 (Sunday Guardian) 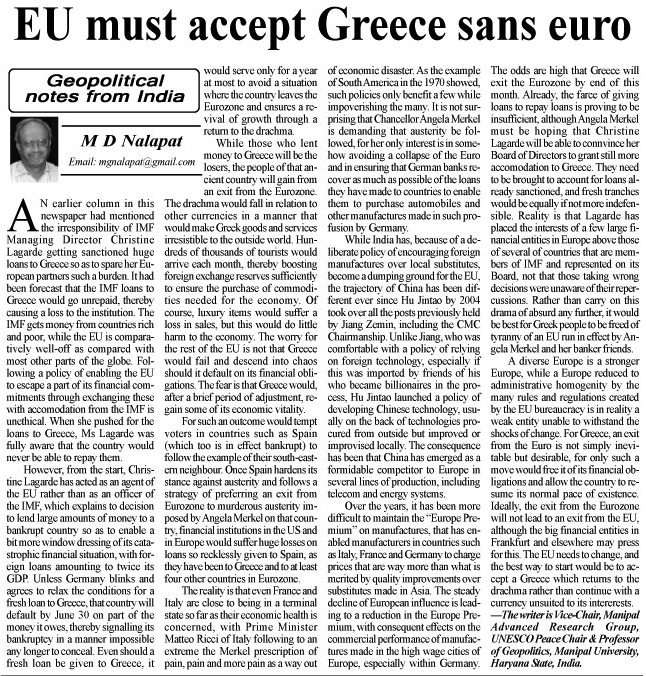 Updated: 2015-06-18 14:50:32
Hong Kong's Legislative Council rejected an electoral reform plan with 28 of 37 lawmakers present voting against it after a lengthy debate ended Thursday. This is a setback to the orderly progress of Hong Kong democracy.What the ultra-democrats are doing could undermine the economic interests of Hong Kong by affecting prosperity, which is increasingly Mainland-generated.
Until 1997 the administrative authority of a territory that has become a world leader in finance and logistics rested with London rather than Beijing.Although the Western media and business leaders invariably credit their own institutions for the success of Hong Kong, the reality is that Hong Kong (as well as Singapore, another former British colony with ethnic Chinese majority), entered a period of rapid development only after former British prime minister Harold Wilson began his country's "withdrawal" from "East of Suez" in the late 1960s.Since then the steady decline of British influence and authority in the East has been matched in the reverse direction by the development of Hong Kong as a global trading hub.
Because of the immense monetary resources the Chinese mainland has and the internationalization of the yuan in the near future, Hong Kong could overshadow London as the premier financial center after New York in the next decade. This is not something the United Kingdom is expected to take kindly to.
China, Russia, Brazil and India are united in their desire to end the supremacy of the Bretton Woods institutions in the world of finance and economic development, because these organizations are engineered to further diminish the powers of countries that had been world leaders before being colonized by European powers.
This is something Hong Kong residents should realize, along with the fact that their city is in Asia, not Europe. The veto reflected the influence of the ultra-democrats on public opinion in Hong Kong,and such a hold may cause a shadow to fall over the full utilisation of business and economic synergy between the mainland and the HKSAR.
The Hong Kong residents should understand the need to seek solutions to their problems that are unique to their culture and geography, instead of borrowing them from foreign countries that have vested interests, including the desperation to safeguard the privileges they have been enjoying for more than two centuries because of their military might and political guile.This is not an argument for ignoring or neglecting everything Western, because Asia has much to learn from the West. In the case of Hong Kong, the strong English language skills of its residents as compared with those of the Chinese mainland is a powerful means of economic and social betterment, a theory that also applies to Singapore and to the "IT revolution" in India.
But if the roots of culture and tradition are pulled out, the remaining structure of Hong Kong will be devoid of its resilience, vitality and versatility, which it so dearly needs to overtake London as an international financial hub. The SAR can achieve this goal only if develops better synergy with the Chinese mainland, not by pulling away from it. In this sense, those who propagate a "one-size-fits-all" version of democracy are being dictatorial, not democratic.
The geographical location of Hong Kong, and its people's culture and traditions, and the opportunities available to them are very different from the models being suggested by countries that have more than a passing interest in maintaining their global dominance in the 21st century.
As technology continues to empower people, the range of choice available to individuals will expand. A knowledge-based society guarantees wide bands of freedom in terms of thought and expression, and certainly the Chinese central government understands this fact. But such freedoms have to be in conformity with the reality of Hong Kong.
Across the globe, attempts to replace or displace existing structures by constructs developed for totally different climes and peoples have resulted in misery and chaos, as the aftermath of the “Arab Spring” shows. Hong Kong is an Asian city, and should remain an integral part of China and a jewel in its crown.
http://m.chinadaily.com.cn/en/2015-06/18/content_21042316.htm
Posted by Admin at 10:31 No comments:

To ensure peace, open up the Northeast (Sunday Guardian)

http://www.sunday-guardian.com/analysis/to-ensure-peace-open-up-the-northeast
Posted by Admin at 16:03 No comments: