In the thirty-fourth paragraph of his 1835 Minute  on  Education,  Thomas Babington Macaulay visualised the creation of a class of individuals “Indian in blood and colour but English in tastes, in opinions, in morals and in intellect”. Anchored to the worldview of his era, Macaulay declined to recommend that such individuals be given the same right as “blood and colour” English-men in ruling India. How-ever, because of Macaulay’s emphasis on the English language and his rejection of the view that education in India be confined to languages native to the land or to its previous conquerors, the Persians, within years hundreds and later, thousands and eventually hundreds of thousands of Indian subjects of the British Empire began to get a facsimile of the education available in parts of Britain.

Politicians and officials who

were the successors to the former British rulers transformed themselves into British colonial officers in attitude and behaviour, if not entirely in morals.

Unfortunately for Macaulay, knowledge of England’s language, history ­ and society ­ (and to a much lesser extent, science and technology) did not make the overwhelming majority of such students “English in tastes, opinions and intel-lect”, although more than a few did adopt the moral hypocrisies of the Victorian era, a tendency still flourishing in a country that has been presumed independent for 70 years.

Contrary to those in post-1947 India who argued that knowledge of English or familiarity with the ways of the people of that island would result in what Macaulay fore-cast – a walking away from India’s native traditions and ethos – most English-speaking Indians retained their affinity towards their own traditions, including in matters of cuisine and lifestyle, though a few did so only in the seclusion of their homes. Indeed, beginning in the 1890s, the higher echelons of the independence movement were composed of those who were educated in the manner that Macaulay had favoured. Across the subcontinent, the English language acted as an equaliser and a homogeniser, bringing together people from different regions, castes and religions, thereby enabling the Twentieth Century campaign for independence to be pan-Indian in scope in a way that the 1857 revolt – carried out in disconnected territorial segments and by uncoordinated entities – was not. Relatively few joined in the 1857 effort to throw out the British: most either remained passive or actively opposed the armed campaign against the Raj. The absence of education in a language that was neutral between one inhabitant of the subcontinent and another would have ensured the balkanisation of the subcontinent long before the colonial power packed its bags and sailed away.

The development of commerce, the growth of the middle class (with its dilution of much of the caste, regional and sometimes even religious differences distinguishing citizens from one another), and the popularisation of English, from the trio of conditions that has ensured the unity of India.

Knowledge of the inter-national link language did not result in a metamorphosis of the Indian into a (tanned) Briton. However, once the Union flag was lowered from the Viceregal Palace and re-placed with the Indian Tri-colour, a metamorphosis did take place. This was the seeping into the psyches of the successors to the Raj that the colonial system remained as a continuum. As a consequence, the politicians and officials who were the successors to the former British rulers transformed themselves into British colonial officers in attitude and behaviour, if not entirely in morals, thereby fulfilling the wishes of Macaulay.

The consequence is that the present-day administration in the Union of India remains tethered to the pre-1947 postulate that the people of the country are unfit to exercise control over their own destinies – and that the government has to have the final word on almost any individual decision of consequence.

It needs to be remembered that the colonial practices of Britain were the opposite of what was carried out at home. If the British people could build an empire, the reason lay in the fact that they permitted much less intrusion into their lives from the Monarchy, taking over for themselves tranches of individual discretion un-known elsewhere on the continent of Europe. Individual Britons used this freedom to win colonies and come up with inventions, each of which they loyally ascribed to the monarch, although both knew such a claim to be a trifle inaccurate.

The post-Independence Government of India needed to accept that the people would be most productive in conditions that Prime Minister Narendra Modi characterised as “Mini-mum Government”. In-stead, what has persisted is a system of governance that in many particulars is even more restrictive than when India was ruled from London. If flights to Delhi from other big cities in India are full, the reason is that the national capital has in effect made the rest of the country its colony.

Officials and the politicians who technically oversee them distance themselves from the rest of the country much as the British in India did in the past, by separate rules and procedures applicable only to them, and by pomp more suited

to Middle Eastern royalty than to the elected leaders of the world’s most populous democracy.

Very little activity can be attempted by businesses, for example, without formal approval from the central government and its agencies. As for transparency in the pro-cesses of government, this remains much less evident in India than in other major democracies. Meanwhile, officials and the politicians who technically oversee them distance themselves from the rest of the country much as the British in India did in the past, by separate rules and procedures applicable only to them, and by pomp more suited to Middle Eastern royalty than to the elected leaders of the world’s most populous democracy.

Small wonder that the British-era focus on the collection of revenue is still regarded by the “post-colonial” bureaucracy as the central task of government. Without consideration of the effects on future growth, the potential short-term revenue-raising segments of the economy are assessed and matched against the year’s expenses of departments and projects. Wherever possible, additional revenues are squeezed out from private entities, in the process often stunting future growth.

India is probably the only country where the price of petrol at the pump has actually risen despite the cost of a barrel of oil falling to less than a third of the level it was four years ago, with the difference going in taxes and revenues to the state. Any sector showing impressive growth attracts a high tax demand, thereby slowing its expansion. An example is the services sector, which slowed down after taxes were first slapped on it in 1994, and by still more after taxes were increased in 2006 and again, particularly harshly, in 2012. Since then, tens of millions of jobs have been foregone in the sector, with the Narendra Modi government continuing the upward trajectory of tax rates and thereby stunting the growth of a sector crucial for the creation of jobs for the 11-13 million new entrants to the job market each year.

Collection of revenue was the central objective of the colonial state, and re-mains so for its successors, who too are fixated on them-selves rather than the people as a whole. Enterprises and individuals in India pay not only taxes to the exchequer but bribes to the pockets of the successors to the colonial bureaucracy. Even the most poverty-stricken stall-holder or handcart vendor has to pay the latter “rent”. And now, with measures such as the demonetisation of 86 per cent of the country’s currency by value, the formerly business-friendly Modi government is seeking to ensure that even those lurking on the boundaries of indigence pay at least some tax to the state beyond the bribes they are liable for. The level of “rent” in the form of bribes and looting of the economy by crony capitalists takes place on a scale that make British pickings in the era of Clive seem derisory.

Given the complex they developed on being “Brown Sahibs”, individuals from Nehru on down rejected any strategic alliance with the West, even while they themselves were far more comfortable in London than in Mumbai, far more themselves in New York than in Lucknow, and far happier to socialise with a European than a native of India. A geopolitical distance was created between the West and India by such individuals, despite the fact that a robust support of the Allies during the Second World War or with the US during the 1960s and beyond would have generated far better results than the policy choices actually pursued, which between 1939-45 gave MA Jinnah and his Muslim League an edge over the Congress Party in decision-making levels in White-hall and led to Partition.

The West-phobic policy continued by Indira Gandhi and her successors in the 1960s until 1984 prevented India from participating in the economic spinoff of geo-political events in the way Japan or South Korea did, or in membership of entities such as ASEAN. The closer the “inner selves” of India’s post-colonial (though hyper-colonial) rulers were to the West, the more they camouflaged that by keeping the country away from the Allies and in the orbit of the USSR. Only genuine nationalists (who incidentally remain fluent in English and in knowledge of the West), safely anchored in their traditions, were open in acknowledging the need for India and its Anglospheric partners in particular to work closer together, especially in matters of security.

Naturally, those seeking to prevent modernity (in the form of education in English or in the expansion and protection of individual freedoms on the scale seen in the US or the UK) are “Brown Sahibs”. They have allied themselves with troglodytes anchored to Sixteenth and Seventeenth Century ways to block the system from re-leasing the population from the constrictions of the state.

Both these groups share the view of their colonial-era predecessors that the people cannot run their own lives, and have therefore continued the pre-Independence practice of the state taking decisions that in more evolved governance systems has remained the prerogative of the individual. Instead of “mini-mum government”, what is seen is the reverse, a steady lowering of the threshold of individual freedoms, including speech. Even the Election Commission of India frowns on any expressions other than those that would be approved by the headmistress of a girls’ convent school.

In India, as during the British era, both government and the judiciary regard themselves as empowered to decide for the citizen on practically any matter. Getting rid of the adherence of the ruling establishment on colonial-era practices and powers is essential for the very survival of the nation. What India needs is another freedom struggle, this time in defence of those rights of the citizen that have been ignored by the post-colonial hyper-state throughout the seven decades of India’s “free” existence. 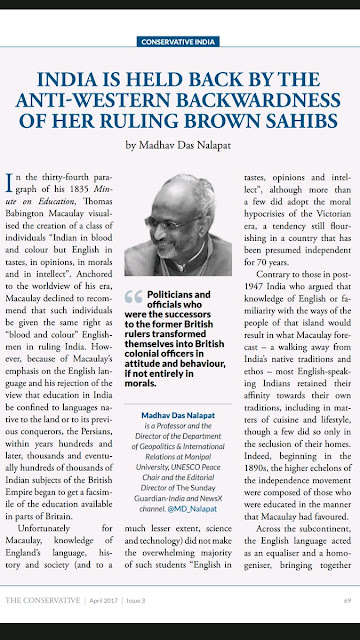 This article is available in the following pdf:

http://theconservative.online/article/india_is_held_back_by_the_anti_western_backwardness_of_her_ruling_brown_sah
Posted by Admin at 16:52