Since the 1980s, a key policy of the Communist Party of China has been to take advantage of prevailing conditions to ensure faster economic growth. From 1981 to 2001, a period when better relations with the United States and Europe were crucial to economic growth, China followed a policy of deepening trade and other ties with the West to its immense advantage.
But since 2001, the mistakes committed by the US-led NATO in its wars in Afghanistan and Iraq have played a role in deteriorating the NATO countries' economies. Also during this time, Asia, principally, and Africa and South America have emerged as key areas of development.
This prompted Chinese leaders, led by President Hu Jintao and Premier Wen Jiabao, to take measures to expand Chinese diplomacy from its earlier concentration on the US and the European Union toward its Asian neighbors, and Africa and South America. Today, 10 years later, China is among the top three economic partners of countries in all the three regions, while in several other places (including India), it has replaced the US in the first position.
NATO frequently uses military power for commercial advantage, most recently in Libya, where oil companies based in NATO member countries have cornered unmerited concessions in the oil sector. But following Deng Xiaoping's "hide brightness and cherish obscurity" principle, China has refrained from using its growing military power to secure commercial advantage. Beijing knows that such gains would be temporary, and that it is best to secure amicable cooperation and refrain from using force.
Even in Libya, the time is not far off when people of that country start protesting against NATO's over-lordship and roll back the privileges that have been grabbed by the NATO-bloc companies, similar to the process that has occurred in Russia. In other countries such as Iraq and Afghanistan as well, commercial advantages secured by companies on the back of their military supremacy will not survive long after the withdrawal of US-led NATO forces. 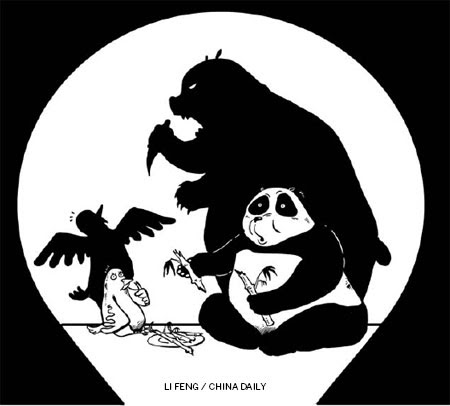 During the past decade, Chinese leaders with Hu Jintao as the CPC general secretary have adhered to the Deng Xiaoping win-win doctrine through peaceful means. The next generation of leaders, too, will tread the same peaceful and prosperous path.
In the past decade, Chinese entities have challenged the dominance of powerful groups in the world markets. Gauging the complexity of the situation, Chinese leaders have taken important steps to strengthen domestic research and development and upgrade industry in order to ensure a steady rise in the quality of Chinese products.
Unable to compete with such offerings in price or quality terms, certain countries are mobilizing different channels to spread scare stories of "security threats" from China, thereby seeking to stop Chinese manufactures from accessing the world markets. What is worrying these business rivals is that the expanded diplomatic reach of China during the past decade and the immensely improved quality of its products are developments that will continue.
At present, the only sectors where the NATO bloc has an advantage are aircraft manufacturing and defense. Very skillfully, some Western media outlets created the "China threat" theory to boost Western weapon and defense equipment exports. The "Iran threat" perception floated by the West has helped the US to export more than $50 billion worth of weapons to the Gulf Cooperation Council countries in the past 18 months, and the "China threat" theory has boosted the sale of expensive weaponry to many Asian countries.
There are a few people in China who speak and write carelessly about a potential military conflict with India or Japan, but the reality is that China remains firmly anchored to the peaceful approach reiterated by the leadership. The current and the next generation leaders both know that a vast country like China needs to prove to its smaller neighbors that it believes in conciliatory policy.
Although some think tanks present scenarios of conflict, the reality is that Asian people understand that peace alone can ensure stability and progress. The only people who stand to gain from talk of war are weapon manufacturers - there is usually a weapons' sales angle to every wave of hawkish commentaries on Sino-Indian or Sino-Japanese relations.
Deng Xiaoping and his successors understood that for Asia's peace and prosperity, the wars and tensions that characterized and weakened Europe for centuries have to be avoided.
China has not fought a war in the past three decades, and it is not expected to do so into the next decades as well. China's leaders have been schooled in the Deng Xiaoping Theory of ensuring prosperity through peace.
Over the next decade, with the consolidation of the politics and policy of peace as practiced since the Deng era, China is expected to present the world with an example of peaceful rise that eschews use of force and focuses on win-win solutions. Such a policy has marked the past decades, and will be taken forward by the next generation of leaders as well.
The author is vice-chair of Manipal Advanced Research Group, and UNESCO peace chair and professor of geopolitics at Manipal University, India.