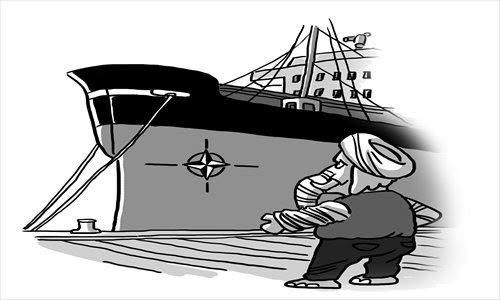 India's present policy on the China seas is clear. It is to be verbally different from that of the US, while in fact mirroring Washington's policy to encourage the other littoral states in the China seas to be more assertive vis-a-vis Beijing's claims.

While US Secretary of State Hillary Clinton is somewhat open about siding with the other states against China, External Affairs Minister S.M. Krishna is silent in words but loud in deeds.

Especially since 2008, the year when the India-US nuclear deal got ratified by the Nuclear Suppliers Group and the IAEA, the Singh administration has cozied up to Japan and Australia, the two main military partners of the US in the region.

It has also established strategic ties with Vietnam, a country seen by Washington as a prospective ally in forming a coalition of regional powers to check the influence of China. The other link is Myanmar, where New Delhi sees itself in competition with Beijing, and which has recently seen a blossoming of ties with the NATO bloc.

Both Prime Minister Manmohan Singh and Congress Party President Sonia Gandhi favor a policy of alignment with the NATO bloc, despite their numerous statements reaffirming faith in the non-aligned movement.

Actions speak much more loudly than words, and since 1998, when the US-leaning Brajesh Mishra became India's first national security advisor, New Delhi has steadily moved toward the NATO bloc in practice.

Given the rise of China and the reality that prosperity in the region hinges on close cooperation with Beijing rather than confrontation, just as prosperity during 1960-99 hinged on close ties with the US, it no longer makes sense for India to join in a strategy of containing China.

Instead, what needs to be done is for New Delhi to work out a strategy of balance, which would deepen ties with both the US as well as China, while not going against the core interests of either.

India is big enough to make an independent foreign policy viable, and indeed, only such a policy would best serve the interests of its 1.2 billion people.

However, because of the pro-NATO tilt of the present dispensation in New Delhi, what is being implemented is a policy of "stealth alignment" with NATO, without India getting any significant concessions in return.

The latest example of such a shift in policy has been Syria. Instead of taking a neutral stand, New Delhi has cast its lot with NATO. It has done the same in Iran, where instead of expanding trade with that country, even normal financial links have been severely cut back to conform to the commands of NATO.

Because of the perception that "India is already in the NATO bag," New Delhi has got next to nothing in exchange for the many concessions that it has made to the alliance.

The EU is still adamantly opposed to lowering restrictions on brainpower from India migrating to its shores, even while it protects high-cost monopolies, notably in pharmaceuticals, from competition by Indian companies.

At home, the Sonia-Manmohan team gives concession after concession to NATO-based companies, while slapping regulation after regulation on domestic companies. Ministries block dozens of projects on the assumption that a desperately poor country such as India should use the same yardsticks as wealthy Europe.

As for the US, the Obama administration continues to deny India access to high-tech collaboration, notably in space.

Will the tilt toward NATO continue into the future? This seems unlikely. The 2014 elections will almost certainly bring change, enabling nationalists to once again take charge of policy.

This will result in a more balanced policy toward the two countries that are at the top of the international order, China and the US.

When there was a need for alignment, India was non-aligned. Today, when there is need for genuine non-alignment, India is aligned with NATO. But not for long. The national interest mandates a policy of conciliation and cooperation with all major players, a list that prominently includes China.

The author is director of the School of Geopolitics at Manipal University in India.