Around 200 PRC ‘fishing boats’ have entered Philippines waters and despite love calls from Duterte to his counterpart in Beijing, refuse to leave. 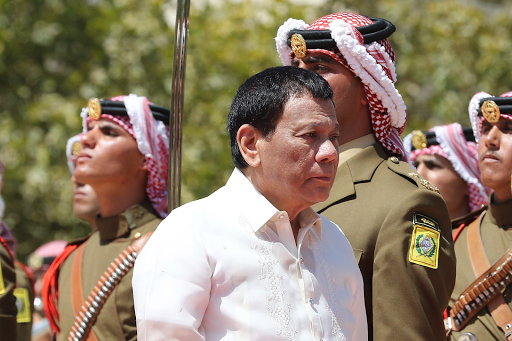 President of the Philippines, Rodrigo Duterte may have his faults, but a lack of confidence is not among them. So convinced was he of the persuasive impact of his charm that he was certain that the leadership of the PRC would reciprocate in a generous manner to his obvious preference for China over the US as the primary ally of his country. After giving marching orders to US forces stationed in the Philippines, Duterte waited for the bonanza from China that he expected would flow from that decision. He is still waiting. In the meantime, the territorial waters of the former US ally are being overrun by the PRC. Most recently, around two hundred PRC “fishing boats”, many of considerable size, have entered waters decreed by a UN-designated agency as Manila’s, and despite love calls from Duterte to his counterpart in Beijing, refuse to leave. Every citizen of the PRC has been told by the leadership of their country that the entirety of the South China Sea belongs to them, and hence that they have a right—indeed, a duty—to roam those waters unmolested by any other country. Even PRC diplomats have caught the mood of Chinese exceptionalism, and have returned to the earthy traditions established by Mao Zedong until such habits got stopped by Deng Xiaoping. Schoolbooks that speak of vast tracts of territory belonging to countries such as India rightfully belonging to the PRC have bred a mindset within the public that make more difficult if not impossible the compromises and adjustments in territorial negotiations with other countries. Compromises that are essential to the escalation of tensions that could even lead to war. The frequent public assertions of the PRC leadership that the South China Sea is as Chinese as the Yangtze river have been accompanied by demonstrations of military power by the PLA. Under Xi, an overwhelming number of citizens of the PRC, especially within the military,are convinced of both the legitimacy of China’s numerous claims as well as the PLA’s ability to secure them by force. The marked change in mindset in the aftermath of the coming to power of Xi in 2012 led to incidents such as the deadly confrontation that occurred at Galwan on 15 June 2020. This was when an Indian patrol came up to what the other side had agreed was within the territory allocated to them. The patrol was nevertheless attacked, and its Commanding Officer pushed to his death. This infuriated his men and led to a violent altercation in which a substantial (but hitherto mostly unacknowledged) number of PLA soldiers were killed along with 20 soldiers of the Indian Army. They lost their lives because of the unexpected pugnacity of a PLA unit that ought never to have been where they were on that day.

Despite every meeting of the Special Representatives across thedecades ending without result in terms of settlement of the border issue, this ritual continues. Every telephone conversation between functionaries in Delhi and Beijing is regarded by sections of the media as a “breakthrough”. A recent consequence of the multiple interactions that have taken place has been the withdrawal by India from vital positions that came under the control of the Army in the Pangong Tso sector. This was on the understanding that the PLA would reciprocate in the other sectors that were discussed during talks between the two sides, both military and civilian. Rather than opening talks on “dis-engagement” in a sector where conditions on the field conferred an advantage to India, such talks should preferably have focussed on sectors where the other side had seized an advantage. The withdrawal from other sectors by the PLA has yet to take place, which ought not to be much of a surprise, given the change in tone and tactics by that military in the era of General Secretary Xi Jinping. Successive governments in India have expended a considerable amount of time in seeking better relations with both Pakistan and China. Given the unimpressive yield from such efforts, perhaps a more productive use of time would have been to work harder in other ways. This would be geared towards ensuring that in the event of a single or two-front kinetic conflict, India would not face its attackers alone as in past wars but would reap the benefit of a previously agreed logistics chain bringing the material needed to ensure that on both fronts, the armed forces of India prevail. Also needed is to work towards a situation where any such attacker would face the consequences of escalation dominance from newfound allies of the world’s most populous democracy. Planning with present and prospective partners needs to be meticulous for these requisites to be met, and those who have supported Narendra Modi from the time he was CM of Gujarat remain confident that such a process must be taking place under his (now national) watch. The next conflict will show this. Given the overall situation where China under Xi is concerned, those wagering on “peace in our time” are likely to be proved wrong, that too before the next Lok Sabha polls in 2024. The impression of a melange of confusing and sometimes conflicting policy moves on the crafting of a “worst case” security matrix needs to be replaced with public awareness that the Modi government has been planning in a manner designed for India to prevail in a future contest. More than anything else, such an outcome would give citizens the energy and confidence needed to ensure rapid progress across a variety of fronts. Among the reasons why Narendra Modi is much more popular than Rahul Gandhi is that in interactions with the public, the former implants hope within the people, the latter despair. Success would promote hope, failure despair.
While he was in the opposition, the current President of Seychelles was opposed to a naval base that would be built by India. He needs to reflect on the swarm of Chinese “fishing boats” plying the waters of the Philippines, and on the intrusions and occupation by the PLA of waters that in UN-sanctioned law belong to the other members of ASEAN. The naval base proposed by India would protect the Seychelles and nearby island countries from a Philippine-style invasion of their space. Such a violation would of course be in violation of UN conventions that Wang Yi once again recently swore to abide by. Keeping the Indo-Pacific free and open would benefit each of the littoral countries of those waters, and this explains the warm response from them to PM Modi and EAM Jaishankar’s vigorous diplomacy throughout the Indo-Pacific Rim.
India should learn from Rodrigo Duterte’s unrequited love - The Sunday Guardian Live
Posted by Admin at 11:32