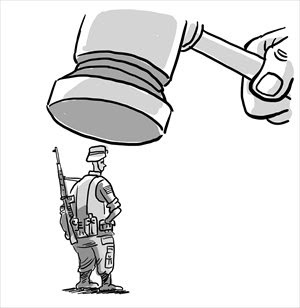 The clash in the Indian Ocean, where Italian marines killed two Indian fishermen, has stirred up tension between India and Italy.

By its stern action against the Italian ambassador Daniel Mancini, which recently forced Rome to return the marines to Delhi, the Supreme Court of India has opened the way for judicial authorities in countries where foreign military personnel operate to hold them accountable for acts against innocent civilians.

In Iraq, Afghanistan and Libya, tens of thousands of civilians have been lost to military action without a single soldier or official being held accountable. This culture of immunity has been finally challenged by the Supreme Court of India.

Many Indians feel that Italy gets special privileges because of the family ties of the Nehru-Gandhi clan to India through matriarch Sonia Gandhi. There are claims that the marines were put in luxurious guest houses rather than in prison for many months after being arrested for murder. Even when they were briefly in jail, they were not kept locked up in their cells, but could walk about freely within the prison premises, eating food prepared specially for them by five-star chefs.

After coming back to India on March 22 because of the threat of arrest of the Italian ambassador should they refuse to return, the Indian government has allowed the two to go not to jail, the way Indian nationals would be, but to stay in comfort in the Italian embassy in Delhi.

The government has given an assurance in writing that they will not be subject to the death penalty, making a mockery of the system of justice in India, where matters such as the quantum of punishment should be left to the courts to decide rather than to the government.

Also, a special "fast track" court is being constituted to try the two marines, so that they do not have to go through the regular court system in India, which often takes several decades before a final verdict is delivered.

Because the Italian witnesses to the murder are unlikely to return to India to give evidence, or may seek to protect their two colleagues rather than reveal the truth, the two marines are likely to get acquitted thanks to the lack of evidence, especially as the ship was allowed to return without its logbooks and other evidence of location being seized by the Kerala police.

Even should they be found guilty, they will be allowed to return to Italy to "serve out their sentence." It is highly likely that once in that country, they will be pardoned.

There may be as many as 160 Indian nationals in jails in Italy, not one of whom has been allowed to return to India to serve out their prison sentence, and there are also over 5,000 other foreigners stuck in Indian jails who don't receive the same special treatment.

In contrast to the silky-soft stance taken by the Indian government toward two individuals guilty of killing innocent Indian fishermen, the Chinese government recently got extradited and executed some criminals who had killed China nationals. For these individuals, there was no five-star cuisine and luxury apartments to stay in, only prison and very soon, death.

Of course, the cases were entirely different, as one involved ordinary criminals who were jointly pursued by the law-enforcement forces of both countries involved, and the other involved uniformed military personnel carrying out their duties. But for Indians feeling humiliated by their country's perceived lack of clout, that difference may not be evident.

The Supreme Court of India deserves credit for rejecting the Italian government's claim that its envoy is as immune from accountability for misdeeds. The way is now open for courts in other countries to begin legal procedures against specific military personnel for murders and maimings of civilians.
http://www.globaltimes.cn/content/771450.shtml#.UVj8NI59nzI
Posted by Admin at 08:50