The Nehru political dynasty in India, including former prime ministers Jawaharlal Nehru, his daughter Indira Gandhi, and grandson Rajiv Gandhi, talked East but looked West. They were each powerfully influenced by their many connections to Europe, and hence looked to that continent for ideas and validation.

European and Russian inspired "Nehruvian socialism" was a failure in economic terms. In 1951, the year Nehru took full control over economic policy, the per capita income of India was higher than that of South Korea or China. By 2011, China's was over three times that of India.

During Indira Gandhi's periods in office as prime minister (1966-77 and 1980-84), ASEAN took shape, and offered India a privileged partnership. Because of the Nehru family's "Look West (but talk East)" policy, this offer was spurned. Only when a non-Nehru became prime minister in 1991 was a "Look East" policy introduced.

Since then prime minister Narasimha Rao was from South India, he naturally focused on Singapore as the lead partner in the eastern strategy, because the city state is a country where immigrants from South India play a key role. Efforts were also made to improve ties with Indonesia, Thailand and Malaysia, although Vietnam was not given much attention.

However, when the Bharatiya Janata Party came to power in 1998, once again India began to "look West," this time beyond Europe to the US.

However, the 2008 financial crisis in the eurozone are combining with economic growth in Asia to convince foreign policy scholars that the Nehruvian obsession with the West needs to be replaced with a new version of the "Look East" policy.

However, in such a matrix, a partner that is larger than Singapore is needed, although relations between New Delhi and the city state will continue to be close and cordial, in large part because of the wisdom of founding father Lee Kuan Yew, who early on saw the potential of India as a geopolitical partner.

Although the US would like India to focus on its historical ally the Philippines or its new ally Vietnam, both of which Washington is recruiting in its efforts at containing the rise of China, the reality is that the country best suited to be the closest partner of India within ASEAN is Indonesia.

Like India, Indonesia is a big country that is multi-ethnic and multi-religious. Both are democracies. Further, both India and Indonesia have many common cultural elements. Indeed, just as several elements of traditional Chinese culture are better preserved in Taiwan than on the mainland, many Indian traditions are followed with greater care in Indonesia than in India, such as the Ramayana saga or the display of the elephant-headed god Ganesh as the destroyer of obstacles.

Years ago, while visiting the office of presidential advisor Dewi Fortuna Anwar in Jakarta, I was pleasantly surprised to see a huge statue of Ganesh at the entrance, a sight that Nehru banished from offices in India, preferring to continue British traditions and systems rather than change to those more steeped in local tradition.

However, as China is rediscovering its heritage, youth in India too are going away from the colonial model favored by Nehru.

Local culture, rather than copycat Western models, is becoming respectable once again, and in such a process, it is inevitable that India turns to Indonesia, Malaysia, Thailand and to Cambodia, four countries which share a great cultural tradition with India.

The Philippines "looks West," while Indonesia, Thailand, Malaysia and Cambodia "look East." And in the future, India will once again "look East." 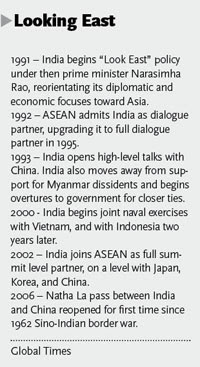 The author is vice-chair of the Manipal Advanced Research Group, UNESCO Peace Chair, and professor of geopolitics at Manipal University. opinion@globaltimes.com.cn
http://www.globaltimes.cn/content/722823.shtml
Posted by Admin at 08:26