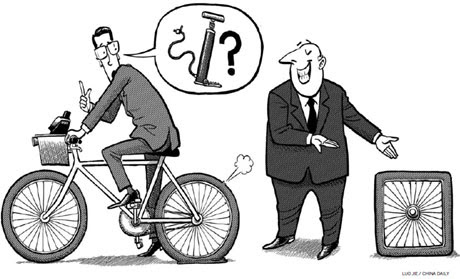 From the time it was set up nearly 70 years ago, the International Monetary Fund has been controlled by Western Europe in partnership with the United States. Even today, long after Asia has overtaken all other continents as the global engine of growth, its focus remains Europe.

The present Managing Director, Christine Lagarde, is trying to persuade Asian economies to surrender the savings of their peoples so that the IMF can continue to funnel the bulk of its funds into Europe, despite the risk of bankruptcy if Greece leaves the eurozone, to be followed by Spain, Portugal and Ireland and possibly Italy and France.

Even though the Western countries were bad global citizens and created the conditions that led to the 2008 financial crash, they will not admit their fault and are not prepared to suffer the pain resulting from their actions. Instead, they seek to make the poorer economies, such as China, India and Brazil, suffer.

Until Brazil and other South American countries understood the folly of accepting advice from the IMF and the World Bank, they suffered immense economic hardships from the 1970s onwards as a result of implementing the wrong economic policies. The prescriptions of the IMF and the World Bank were geared towards the benefit of Western Europe, North America and Australia.

Today, commodity prices have reached dizzying heights because speculators based in the US and the European Union control and manipulate the commodity market, squeezing as much profit as they can for themselves, no matter what the consequences. The same reckless disregard for the welfare of anyone else is manifest in Western countries' massive contribution to global warming, although of course, they want the people of India and China to make sacrifices in order to rectify a situation for which they are culpable.

Sadly, despite the evidence of their mismanagement of not only their own economies, but also the world economy, people, from Asia in particular, continue to have a fascination for the advice that they get from West, especially the US. The elite families send their children to study in institutions in these countries, and these young and impressionable people return with a blind belief in the efficacy of economic remedies that benefit the West, but which are toxic to their own countries.

In both India and China, the influence of such "Western-educated returnees" is substantial, especially in the field of financial management. The consequence has been that the two giants of Asia have followed the same basket of policies.

These policies include very steep rates of interest as well as severe restrictions on money supply by the monetary agencies. The belief is that such policies will curb inflation. However, inflation has not abated in the least, despite the sharp rise in interest rates and curbs on lending. What has suffered is output, and consequently growth in employment. It is the same fund managers who cheer the very low interest rates in the US, Europe and Japan that call the loudest for China and India to keep interest rates high. Yet to do so would damage the economies of the two Asian countries, thereby ensuring that Western countries do not have to face severe competition from either. Hence it's a right move that the Chinese central bank cut the main interest rates on Thursday.

The West's economic playbooks say that China and India are "overheating" because their rates of economic growth are close to double digits. Yet poor economies, such as China and India, need a much higher rate of growth than rich Western countries, because of their low levels of per capita consumption and their need to raise the living standards of hundreds of millions of people.

In China and India, inflation is caused by the hidden play of commodity speculators, and both countries need to go before the UN to criminalize such activity. They need to ensure that enterprises, especially those in the small and medium sector, have access to bank funds at low interest rates. The present policies benefit the banks while harming the overall interests of India and China

The remedies that are suggested by the developed world are toxic for poorer countries. India and China need to avoid the trap that South America fell into during the 1970s, when the continent suffered huge economic pain because it blindly followed false advice. What is needed is for Beijing and New Delhi to concentrate on domestic economic growth, hopefully in cooperation with each other.

The author is vice-chair of Manipal Advanced Research Group, and UNESCO peace chair and professor of geopolitics at Manipal University, India.