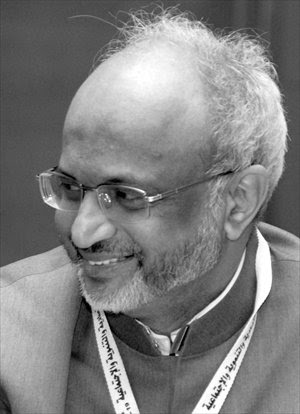 Professor M.D. Nalapat (Nalapat), director of the School of Geopolitics at Manipal University in India

The Stockholm International Peace Research Institute (SIPRI) released on Monday its latest international arms transfers data, which shows that India has become the largest arms importer in the world. What drives this huge demand? How will this affect regional stability? Global Times (GT)reporter Gao Lei talked to Professor M.D. Nalapat (Nalapat), director of the School of Geopolitics at Manipal University in India, on these issues.
GT: Why does India need to import so many weapons? Is it for countering China, or is India planning to expand its own arms industry?

Nalapat: India has become the largest arms importer for domestic political reasons. The Indian political class has become even wealthier than their US counterparts. These days, the purpose of politics is to enrich those in the system, which is why children of politicians in India get trained to fight and win elections, and are supplied with the money to do so.

Fighting a parliamentary seat in India is expensive, and costs about $2 million, sometimes much more. Almost all this money comes from unaccounted, usually criminal, sources, who pay the politician so as to get protection for their illegal activities.

Defense procurement from abroad has become one of the biggest sources of generating secret cash reserves for influential politicians, almost as big as hidden payments from purchase of oil products from abroad. Although Defense Minister A. K. Antony is himself honest, yet he has been unable to prevent large-scale corruption in defense purchases. Delhi is filled with international arms merchants, complete with suitcases of cash and tempting women.

The reason why Indian companies are prevented by successive central governments from entering the field of defense production is that many politicians do not trust Indian businessmen to keep secrets. They believe that if they collect huge bribes from local private companies, information about this may leak to their rivals. Hence they keep out Indian companies and deal only with government companies that they fully control and foreign companies, who can be trusted to keep secrets.

Unlike China, which has developed a huge indigenous defense industry, India is reliant on foreign suppliers, mainly Russia, France, the US and Israel, for almost 80 percent of its critical equipment. Although hundreds of billions of dollars have been spent on such purchases, this far India has not even been able to build a local third-generation aircraft, whereas China is experimenting with fifth-generation models.

The reason is the exclusion of the Indian private sector from defense procurement. So long as politicians in India are greedy for money, the hard-earned foreign exchange reserves of the country will be wasted on expensive weapons systems, just as countries in the Middle East are spending tens of billions of dollars on such systems. Corruption is at the core of India's massive defense purchases from abroad.
GT: Pakistan is third on the list of Asian spenders. Are the two rivals in an arms race?

Nalapat: The Pakistan army has a single ambition, which is to be the equal of India. This is not logically possible, but the objective has led to a flood of arms purchases by Pakistan, including from China, that have had a severe negative effect on its economy.

My view is that an India-Pakistan or an India-China war is very unlikely, because governments in all three states know that citizens wish nothing more than economic development. A war would devastate the economy.

However, arms merchants continue to fund "experts" who write and speak of "imminent" war between Pakistan and India.

Also, if you examine the roots of the many commentaries of a likely war between India and China, you will find that NGOs and others with indirect links to arms dealers are behind such talk. The fact is that the two giants of Asia have leaderships that are too wise to go to war with each other.
GT: Why is India, unlike China, not seen as a threat to global security?

Nalapat: India is the second-largest English-speaking country in the world, after the US, and by 2020 will be the largest.

Further, India has institutions modeled on the British colonial pattern, including its judicial, police and administrative systems. Hence people from the US and the EU do not feel challenged by India the way they do by China, which has a much lower level of congruence with US-EU systems.

Also, India is far behind China in economic and technological development, and cannot pose a challenge to the dominance of the US-EU the way that China already is.

For all these reasons, it is not possible that the US-EU will see India as a threat, unless of course Delhi aligns with Moscow and Beijing as a counter to the NATO powers.

GT: Would the money be better spent on public welfare than arms?

Nalapat: Any major power needs a strong defense industry. It cannot rely on foreign sources to protect its people, the way corrupt politicians are forcing India to be.

However, to ensure that the defense industry generates local employment and technological advancements, it has to be as indigenous as possible. This is the policy being followed by China, which has localized much of its defense procurement, especially since President Hu Jintao took over in 2002.
http://www.globaltimes.cn/NEWS/tabid/99/ID/701225/Corruption-drives-Indias-spending-on-foreign-arms.aspx
Posted by Admin at 07:15