"New Approach to a Critical Turning Point: Buliding a Global Consensus for 1 Korea" 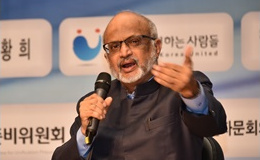