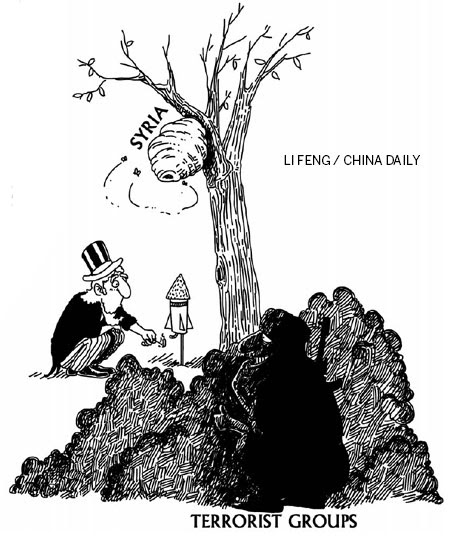 M D Nalapat
The United States has always, especially after World War II, sided with colonial powers or former colonial powers in conflicts with colonies or former colonies. In Vietnam, the US took over from where France (the colonial power) left to fight an almost 20-year war that left hundreds of thousands of people dead and the country devastated. More recently, it dragged other Western powers, including the United Kingdom, into bloody wars in Afghanistan and Iraq.
And now US President Barack Obama, who was awarded the Nobel Peace Prize for his "commitment" not to use force, wants to intervene militarily in Syria with the help of France, which once controlled part of that country. Therefore, Syrians fear their condition will be like the Iraqis, who have been suffering mayhem, chaos and destruction ever since American and British troops invaded their country.
Perhaps "sweet memories" of France's colonial past have made President Francois Hollande so eager to fire missiles and bombs into a country that fought against French rule in the first half of the last century.
Of course, the former colonial powers are trying to add UN legitimacy to their campaign to re-establish their sway over the countries they once ruled. The United Kingdom was in action in Iraq, Italy sent in fighter planes to bomb Libya, and the French, after intervening in the ongoing civil war in Mali, want to attack Syria.
But the major Western powers, especially the US, are ready to "overrule" the UN altogether and use the "Doctrine of the Right to Protect" as justification for attacking a sovereign country, which certainly would cause the deaths of countless innocent civilians and ruin the lives of the survivors.
If former US president George W. Bush's Doctrine of the Right to Protect were to be taken seriously, rather than accepted as what it is, a fig leaf to cover up military action against a country not friendly to NATO, the world would have seen a coalition against the US and the UK for causing the deaths of tens of thousands of innocents in Iraq as a direct consequence of Anglo-American military strikes.
A coalition would also have formed against the Arab countries supplying lethal weaponry and cash to Syrian rebel groups linked to Al-Nusra, an al-Qaida associate, who have used them to launch attacks against Alawites (a Shitte sect, to which Syrian President Bashar al-Assad belongs), Christians and moderate Sunnis.
Unfortunately, doctrines such as the one propounded to Bush in 2005 are used by the US and its allies only in cases where they help promote the interests of those seeking to dominate other countries through the use of military power.
In Syria, the supply of arms and money to extremist groups by some Arab countries has raised fears of sectarian divide and intensifying violence across the region. Already, Iraq and Lebanon have seen an increase in the number of sectarian clashes and attacks.
Across the Middle East, ordinary people are rising up against religious fanatics, as we have seen in Egypt and Turkey. In Egypt, the Muslim Brotherhood's attempt to change the secular society into a fundamentalist state was opposed by the people. The Bashar al-Assad regime is not perfect, far from it, but it is at least secular.
Should the US and France intervene militarily in Syria - and by default help Al-Nusra overthrow Assad - they will create a security threat not only for the region but also for themselves, which will take decades to overcome.
The author is vice-chair of Manipal Advanced Research Group and UNESCO peace chair, and professor of geopolitics at Manipal University, India.
(China Daily 09/04/2013 page9)
Posted by Admin at 04:32