Pakistani President Asif Ali Zardari arrived in India yesterday for a private visit, the first trip to India by a Pakistani head of state since 2005. While some analysts believe this is just a small gesture, many believe the visit signals efforts on both sides to normalize their relationship. Can the two warm up their relations? What's the role of the US in India-Pakistan ties? Global Times (GT) reporter Chen Chenchen talked to M.D. Nalapat (Nalapat), director and professor of the School of Geopolitics at Manipal University in India, on these issues. 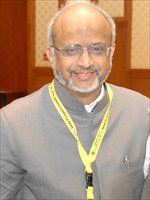 M.D. Nalapat (Nalapat), director and professor of the School of Geopolitics at Manipal University in India

GT: Do you agree that Zardari's visit actually represents a strong will from both sides to warm up the relationship?

Nalapat: There are two Pakistans. The first is the moderate majority that wants peace and religious harmony, and which therefore seeks to have a friendly relationship with India.

Unless Pakistan taps into the India growth story, there is no way that it can replicate the 1960s rates of growth, which at the time were much greater than India's.

However, the military in Pakistan still has a non-business agenda with India, that focuses on making India give Pakistan concessions on territory that Delhi has not agreed to for six decades, and which are politically impossible to make.

Zardari represents the moderate, pragmatic view. His intention is to take forward steps that would increase economic and other contact between India and Pakistan, so that an atmosphere can be created for amicable resolution of all issues.

Because the Pakistani army and the extremist groups in Pakistan are opposed to him, he will have a difficult time convincing the entire Pakistan establishment that peace can only come about after prosperity does.

However, his Indian interlocutors appreciate his stand, and welcome the visit.
GT: How do you assess the US' role in the India-Pakistan relationship? Some say the US, with its "return to Asia" strategy, generally plays a positive role in India-Pakistan ties, because the US needs both countries on side. What's your view?

Nalapat: The US has played a very negative role in India-Pakistan relations, by constantly interfering in the internal affairs of both countries, besides seeking to insert itself into all bilateral issues.

By its open advocacy of the Pakistan position until the 9/11 attacks, Washington encouraged hardliners in Pakistan to refuse to normalize its ties with India till territory was surrendered in exchange.

Any effort to re-draw boundaries in the region is doomed to fail, and by backing Pakistan, the US ensured that India-Pakistan relations remained tense. While the US talks of Asia, it does so as a co-partner of Europe, a continent that has had an unhappy history in Asia as a result of colonization for more than three centuries.

Unless the dynamic of Asian-US relations becomes the same as the chemistry of European-US relations, Washington will continue to be a self-interested, de-stabilizing force in Asia.

In my view, this is the reason why the US is no longer the most influential player in Asia. Since 2010, and the meltdown in confidence in the US and EU that accompanies the financial meltdown, today relations between Delhi and Islamabad are much better than between Islamabad and Washington.
GT: Can the US act to balance the needs of India and Pakistan?

Nalapat: India and Pakistan have congruent interests. It is only because the false theories of US and UK conflict resolution specialists have been swallowed by the rest of the world that there is a perception of "objective rifts" between the two countries. Objectively, the two countries have everything to gain from better relations.

As for the US, this is a power that, like its financial markets, looks for short-term gains to the exclusion of everything else.

When it is convenient for Washington to have higher tensions between Delhi and Islamabad, it will adopt policies that create such tensions. When it seeks to cool things down, it pushes for friendly ties.

Given the vacillation and opportunism of US policy, it would be folly for India or Pakistan to base its own course of action on the basis of advice from Washington. Rather than "balance," the US tilts first to one side, then to the other. Although these days the tilt is toward India, till recently it was firmly in the direction of Pakistan.

Former US Vice President Dick Cheney was even responsible for outsourcing the war against the Taliban to the Pakistan army, and as a consequence, the US is mistrusted in Afghanistan.
GT: If another India-Pakistan conflict erupted, would the US face the collapse of its anti-terrorist front in this region?

Nalapat: Should conflict erupt, it would only be because events will force India, the US and Afghanistan to take a common position against extremist elements that has sanctuary in Pakistan. It will no longer be just an India-Pakistan conflict, the way it was in 1948, 1965, 1971 and 1999. The conflict would involve other powers, both from far away and from the region.

Hence, rather than face a collapse of its anti-terrorist front, the US would instead be able to continue the conflict with India as an ally. Such a partnership may arise if the situation in Pakistan deteriorates to a level where the civilian government is powerless against the extremists.
GT: How do you see the prospects of the US-India-Pakistan relationship and its potential impact on China?

Nalapat: The US is in the process of abandoning its reliance on the Pakistan army and coming closer to India's policy of giving preference to the civilian government.

Because India respects the civilian government, it treats the Zardari visit with great seriousness and respect, unlike the US. Today, the only global power that gives more weight to the Pakistan army rather than the civilian side is China.

Should Beijing continue with such a policy, there would naturally be tensions with India and the US. However, should China join India, Afghanistan and the US in seeking to ensure civilian supremacy in Pakistan rather than military dominance, then Beijing can join hands with Washington and Delhi in helping the civilian government in Islamabad to resist the extremists that have been trained by the army since the time of General Muhammad Zia-ul-Haq more than three decades ago.
http://www.globaltimes.cn/NEWS/tabid/99/ID/703759/Civilian-majority-in-Pakistan-wants-peace-with-India.aspx
Posted by Admin at 23:17